Inside Scoop - Spartan Daily is a Pacemaker finalist!

Inside Scoop is a column about the operation of the Spartan Daily, San Jose State's student newspaper. 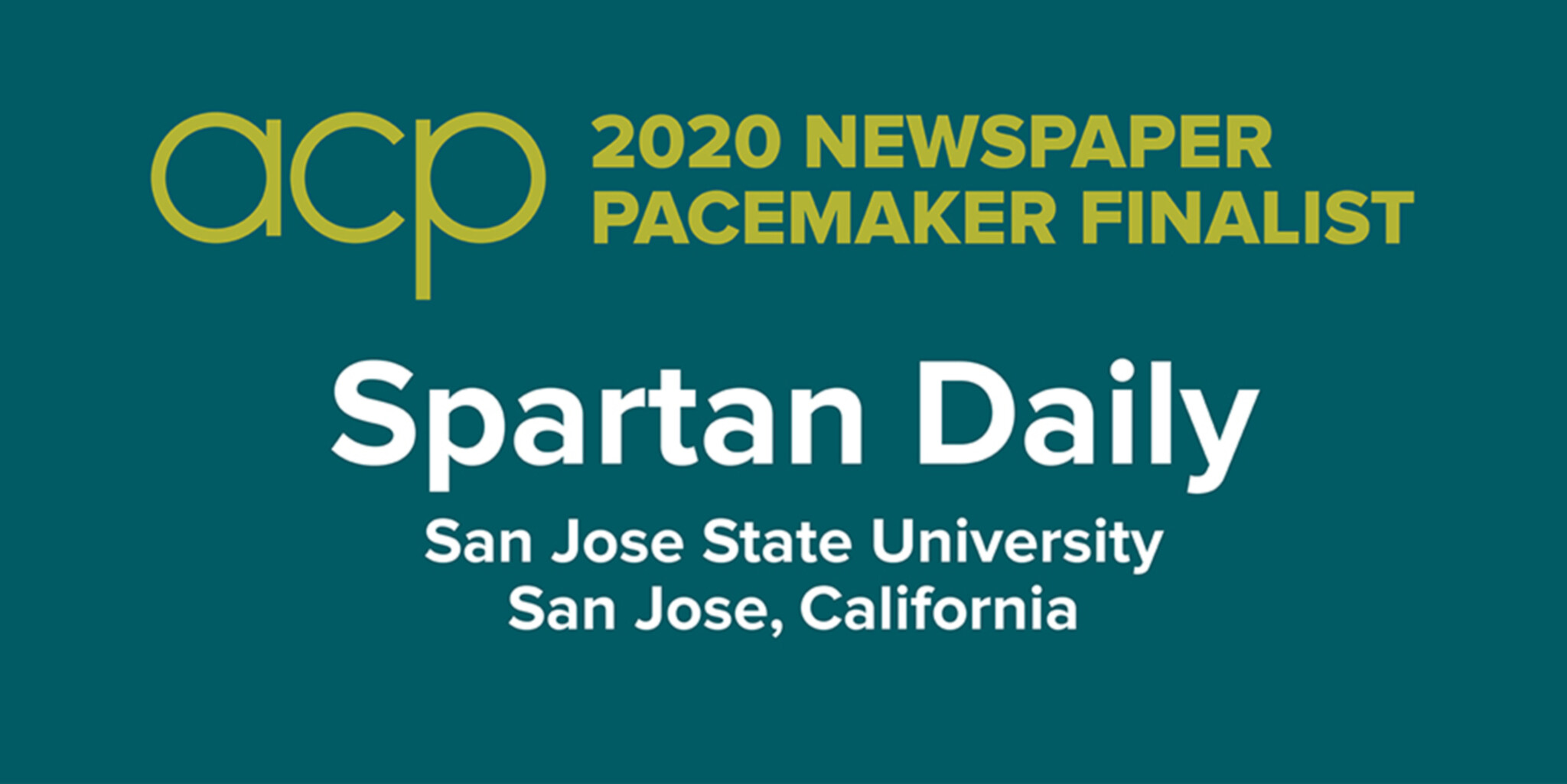 It feels like forever ago, but at the end of the Spring 2019 semester, I was chosen as the next executive editor of the Spartan Daily. I definitely felt a lot of pressure to keep up high quality newspaper that my predecessors put out three days a week. But at the same time, I had that inner drive of "What's next?" and "How do we get even better than before?"

A few days after my selection, Marci, our design chief, and I went to Peanuts (the de facto Spartan Daily hangout restaurant) to discuss the "Pacemaker". I knew winning an ACP Pacemaker is pretty much the top award in college journalism as they're unofficially known as the "Pulitzer Prizes of college journalism", but I didn't realize what exactly it took to win one. Luckily Marci had some experience in this area - she had already won two Pacemakers as a part of The Advocate during community college.

She walked me through ACP associate director Gary Lundgren's 2018 "The Pacemaker" presentation, which started off with examples from past winners. To be honest, it was intimidating. Most of those papers looked significantly better than ours and it didn't seem possible to get on their level, to the point that I didn't even make it one of my goals (and I had some pretty lofty goals).

There were some basic tips in Gary's presentation, which became the foundation of how I wanted to improve the Spartan Daily:

Trying to address all of these really required redesigning the whole story flow, from coming up with the idea, to writing a story and finally publishing it. It became a philosophical shift as we tried to take the guidance to heart.

Previously, story ideas were mostly pitched from staff writers, which allowed for a greater diversity of story ideas. But it came with a downside, staff writers often favored writing about the same topics and the ideas rarely had coordination when writers did work on similar stories. And I don't think continually allowing staff writers to pick what they write about really fulfilled what Gary recommended.

So instead we flipped it around and had editors come up with the majority of story ideas. Aside from the benefit that editors usually came up with higher-quality ideas, it allowed for our ideas to be more cohesive, focusing on what each editor wanted in their section.

Building on that, we picked the topics for our "special" issues and content ahead of time so we could spend more time planning them out, hopefully leading to a higher-quality result. I'm pretty proud of our women's soccer special and the Fighting 'fake news' special.

Then we streamlined the editing process. Normally, stories go through three primary rounds of edits. "First edits" are done by the section editor, who has been working closely with the writer already. "Second edits" would be done by the executive or managing editor, and finally a copy editor would do "copy edits".

As a writer, I had seen this process often times become repetitive and frustrating when one round of edits tries to undo what a previous one did. To avoid that, each round of edits was given specific things to look for and fix. First edits ensured the 5 W's (who, what, where, why, when) were answered, at least 3 sources were used, and also that the story actually matches what they initially pitched. Second edits would then go into the finer details, improving the lead, improving word choices, eliminating reptition and so on. And of course copy edits would ensure compliance with AP Style and do basic fact checking. Editors were empowered to send stuff back if they came across something that should've already been fixed by that point.

And then there's all the little stuff we did to make our content crisp: we switched to ragged right for columns (differentiating opinions and news stories), used label heads (a headline with no active verb like "Period problems") for our feature stories and enforced having borders on all of our photos. We also added more regular, dependable content so we weren't rushing at the last minute to fill all the space. These aptly named "space fillers" included the crime blotter, campus images, and weekly columns.

I think we also made significant improvements in recognizing individual accomplishment while still ensuring our collective success (and failure) was treated as team successes and failures. Each week the editors selected a "Staff Writer of the Week" to highlight someone who went above and beyond. We also eliminated grading penalties that punished individual writers for making mistakes like spelling a name wrong when in reality, such a mistake could only be made if there were significant failures in the editing process as well.

But at the same time some initatives to strengthen our content by adding longer student profiles or featuring classes kind of faltered. At first we didn't really have a large enough stuff to have writers work on much longer pieces, but once people had settled in, I really didn't push it that much. The few long-form profiles we did were good starts, but the more experience we had writing and editing them, the better they would've been.

And some changes that I tried to implement at the very beginning like weekly doubletruck features and editorials left an understandably sour taste in some editors' mouths after some early failures as we just weren't ready to handle that workload yet. Again, I didn't really push it after that.

Part of that was because in addition to all those changes I was really trying to follow the recommendation of simplicity. We favored having less, higher-quality content rather than trying to do more and sacrificing quality. So instead of putting out a 20-page paper that was reaching to fill space, we put out 8 and 12 pagers that aimed to be more cohesive. Most of our newspapers were 6-8 pages because that seemed to be our natural limit given the quality we were striving for.

The other significant shift was planning things out ahead of time as much as possible along with contingency plans, giving us plenty of flexibility when things inevitably didn't turn out as expected. It sounds so basic, but it really came in key for all of our special content. And having a plan meant we could jump on a plane to Colorado with less than 24 hours notice, but that's a story for another time...

So with respect to all the ideas that I dropped early on, I don't know whether we would have been able to pull it all off or we would've doomed ourselves if we continued down that extremely ambitious path.

I think it was especially fortunate that the next executive editor, Chelsea, was my news editor and had endured the ups and downs of all of these changes. I'd like to think she also saw the value in them, often refining or continuing them throughout her semester.

All that said, when the list of 2020 Newspaper Pacemaker finalists was published, I scrolled through the list, seeing all of our typical competitors: The Daily Californian (UC Berkeley), Daily Bruin (UCLA) and Daily Trojan (USC). "Sigh, we're going to lose to all of them again," I thought.

And then I scrolled a little farther and saw the familiar face of Lindsey Graham staring back at me, from my column about the EARN IT Act.

As far as I know, this is the first time the Spartan Daily has been a Pacemaker finalist. I have no expectations that we'll be named a winner at the award ceremony later today, it just really means a lot that we were even named a finalist.

As I wrote last time, "This is probably one of the most team-based awards that I've had my individual name on." This wouldn't have been possible without Victoria, my managing editor, and the rest of the editors and staff writers. And I'm always grateful for the support and well, advice from our advisors, Richard Craig and Mike Corpos.

And then the Spartan Daily has four 4 individual finalists too, all in design categories!

Thanks to Marci for reviewing and editing this post before publication.